If you follow my blog, you know from previous posts how much I LOATHE them. Most do. Why would you look forward to being separated for six to twelve to sometimes even 18 months from your spouse? Unless you are not really a big fan of your spouse, it really sucks.

Previous to this deployment, I have been through two other ones. But this one was vastly different. Now I have a baby. A tiny person who is solely dependent on me only. There are single mothers that will read this and have zero sympathy for me and I totally understand that and I am okay with that.

Since entering motherhood, I have done quite a bit better than I was expecting out of myself. BUT, when left to do it all alone, I am not so good. That is a whole ‘nother blog post… The purpose of this post is to say that I was counting those days until that boy came home more than I ever did on the other two deployments. And for a much different reason! They say your priorities and your perspective changes when you become a parent. Truer words have never been spoken! I was highly impatient with the freedom my man had over there to do as he pleased and to enjoy a social life of some kind while I was nursing and rocking and bathing and nursing and clothing and changing diapers and nursing and consoling during meltdowns and holding when falls happened and nursing and waking up at night and trying to road trip with a fussy baby and nursing…oh wait, did I already say nursing once or twice?? Sigh. I wanted the freedom to go and do sometimes, the freedom to be out on a Saturday night, the freedom to take a shower when I wanted (alone), to eat when I wanted without someone stealing my food and to go to bed when I wanted and wake up when I wanted. Selfish? Yes. But I only wanted these things from time to time. Turns out, they don’t even happen once in six months when your baby daddy is gone. Mama is exhausted. And I only have one child!

We knew it would be May when he finally returned to us. We were hoping he would make the wedding I was a bridesmaid in on the 4th. But when it came down to it, it wasn’t happening. I didn’t hold my breath or count on the military to make it work out for a second because I know better. They always eff it up. Always. It’s better to just count on your plans going to shit and then be surprised if something miraculous happens.

Well, he tried to make something miraculous happen. He tried his very best to surprise me in time for the wedding buttttttttt along came the military to eff it up. As usual. However, he salvaged what little surprise there was left and magically appeared at the post-wedding brunch last Sunday morning ☺ Obviously, from the photos taken that morning, I had no idea. I might have run a brush through my hair or maybe brushed my teeth that morning had I known.

What a great ending to a perfect weekend! I am so glad our rockstar friend Kelly snapped some photos so we can always remember the day that ended this stupid deployment and the happiness he brings to our little girl’s face. She knew right away who he was and has been attached to him, further wrapping him around her teeny tiny little finger, ever since ❤ 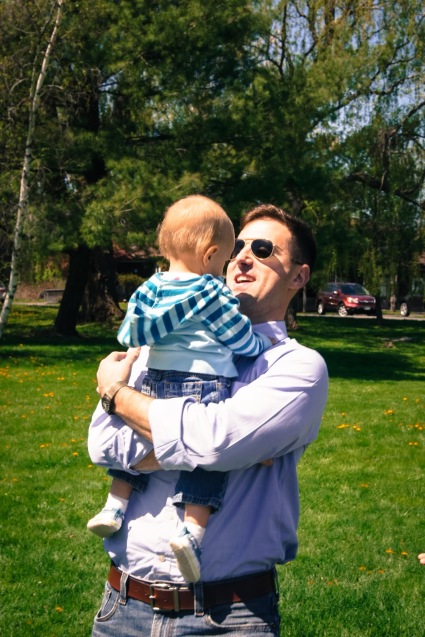 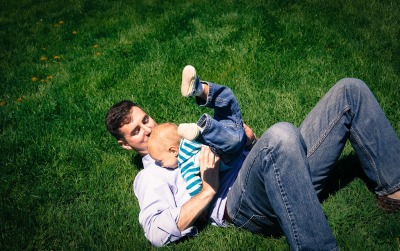